BETA.  UNDER CONSTRUCTION.  FOR RELEASE SEPT 1.

Testing is central to recovery. A rapid affordable test would change everything. Kids would be back in school.  Businesses could reopen. Race to the Test is a campaign committed to find and help bring such tests to the market. We have put in place two core components:

The US Testing Strategy. We hope to foster discussion, debate and find the right answer. Because testing delayed is testing denied we will explore case for a more frequent lower sensitivity test vs. a less frequent higher sensitivity test:  a >50% test versus >95%.  Which do think is more effective?  Depends on when you get the results. The answer may surprise you.

The Role of Government. Does the US regulatory structure hamper the innovation that could save us? A test is harmless, so why in a time of global crisis does a test need to be FDA approved anyway?

The COVID Testing Consortium.  This is a group to accelerate collaboration. This includes experts in public health, media and the private sector. If interested please apply. We have membership levels for everyone.

This page at the Virus Project is dedicated to keeping track of progress with weekly progress reports. We provide what we think is the most important current summary of the effort.

Our starting point. September 1st.  This August video Harvard Professor Michael Mina describes the fundamental flaw in the current US testing approach. He lays out the science and logic for rapid tests. The good news is we can address this disaster straight away. He is interviewed by Kyle Allred of Medcram. 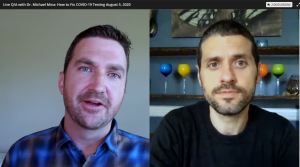 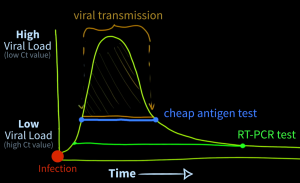 Below is the template we will use for weekly updates on progress. Each will be a post that is then stacked on previous week. Below shows how this appear after three weeks. All content is fictitious.

On September 14th the FDA issued guidance regarding minimum testing for the Antigen test. They had come under increasing pressure to lower the standards of such tests in part from efforts made by the Virus Project and the tireless efforts of its task force. The significance is not to be understated as it means that there is a higher certainty that the investment made in the antigen tests will be recouped by the investors and manufacturers.  60 Minutes interviewed a member of the task for its airing September 23rd.  It is clear that the collaborative efforts are beginning to pay off. There was some hope of a meeting with the White House in order to secure an executive order that will clarify regulatory oversight for such tests, making approvals much faster. XYZ co.  announced a licensing agreement with the government of Spain for their technology.  ABC co received funding for their unique rapid test.

The Virus Project announced its Race to the Test Initiative. The effort is to concentrate attention on finding a rapid inexpensive test that will enable schools to reopen.

Race to Test Resources and Links: