Vaccines are challenging. They take time.  The average time to bring a vaccine to market is 12 years. We still don’t have one for HIV/AIDS after 40 years. But for coronavirus, we are seeing estimates of just one year. It is not prudent to think that a vaccine is going to save the day.

This video outlines the challenges of vaccines. The vaccine may not work, it may be unsafe, and if it does work it may be too late to avert economic ruin.

Traditionally, vaccines have functioned by introducing the body to a version of the virus itself that doesn’t cause disease, or to an antigen that’s typically a protein on the virus surface. Both prime the immune system and spur it into action should someone encounter the virus. These two approaches provided the world with effective vaccines for polio, measles, hepatitis B, and other diseases.

But each time, researchers have to develop anew the biological machinery — cells and reactor conditions — needed to manufacture the vaccines.

FasterCures, a center of the Milken Institute, is currently tracking the development of treatments and vaccines for COVID-19 (coronavirus). This tracker contains an aggregation of publicly-available information from validated sources. 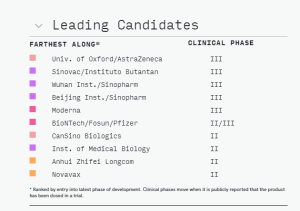 According to Milken, there are 212 Vaccines in development in 9 categories. 34 of which are now in testing.

The leading vaccine candidates as of mid September 2020 are listed here.

Twelve to eighteen months is considered a short time to develop a vaccine. They are now thinking in record time, but development will be with limited safety testing.

In March 2020, the Coalition for Epidemic Preparedness Innovations (CEPI) initiated an international COVID-19 vaccine development fund, with the goal of raising US$2 billion for vaccine research and development, and committed to investments of US$100 million in vaccine development across several countries.

Also in March, the Canadian government announced CA$275 million in funding for 96 research projects on medical countermeasures against COVID-19, including numerous vaccine candidates at Canadian universities, with plans to establish a “vaccine bank” of new vaccines for implementation if another coronavirus outbreak should occur.