This modified PCR test overcomes the invasiveness of doing a nasal swab to detect the presence of the virus in the viral RNA, detected in saliva . Mirimus has taken the saliva test version of PCR tests into what I call large scale testing, you know, thousands of patients per day.

The testing is done in pools, on the pools can be anything greater than two quickly and done overnight you can clear a whole group and you are then able to look at groups of individuals without violating the HIPAA rules and testing rules that state various states have.

ORIGINS;  Saliva direct licensed from Yale University developed in conjunction with the NBA which has used the system to successfully. The company was was founded by  Prem Premsrirut MD PhD who also founder the parent organization, a Brooklyn based firm engaged in the design, development and pioneering of new genome editing technologies to develop animal models that are crucial for the preclinical evaluation of new therapeutics. 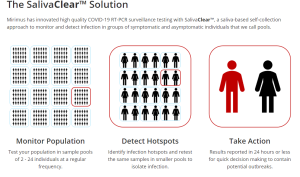 DATA:  Studies been done, show that this approach can picks up asymptomatic individuals, and those are already showing symptoms.

MARKET: Frequent, high-quality and affordable surveillance testing is essential to reopening schools and workplaces. RT-PCR testing has been considered the gold standard of COVID-19 testing, but its high cost puts testing accessibility and frequency out of reach for millions of students and workers eager to get back to school and work.

BUSINESS MODEL:  Clients pay a fee per test completed, which averages under $20 for a group of tests which is significantly below the cost of PCR quailty tests in terms of speed and cost.

CUSTOMERS:  Current customers are private schools in the New York area. The goal was to make system very affordable, and portable to the sense that this group of technologies is assembled together, can be shipped off to other groups such as large employers. The company expects to  announce a collaboration with the Wynn hotel to  set up their testing services.

PROCESS:   At each site trained staff collect samples provided to a courier who drops it off with at their Brooklyn Lab where they amplify, and detect, and we get the results that evening. If there a positive they identify a sub pool minimum groups of two, and then can communicate the need for a PCR test.

FINANCING. Approximately $2 million dollars from private donors and a VC fund Topspin partners funded the purchase of equipment to automate the processes.

IP.  The company is one of three licensees of a this technology which was developed at Yale. It has a license that is specific to both geography and market sector.

CURRENT STATUS: At the moment the company is running 5000 to 8000 samples, per day and expects it can scale to 50,000 samples a day.  They have doubled staff in about three months (from 15 to over 30). And we believe that in the next couple of months may double again.