For diagnosing SARS-CoV-2, a PCR test starts with a nasopharyngeal swab, which looks like a long Q-tip that draws mucus from the back of a patient’s nasal cavity where it meets the throat. This swab goes in a vial and is shipped to an FDA-approved central lab facility. There, technicians use reagents to extract any viral RNA. An enzyme called reverse transcriptase converts the RNA to a complementary sequence of DNA, which can be replicated many times over to make it easy to detect. 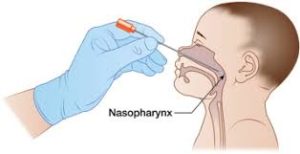 To accomplish this replication and detection, technicians—or automated machines, in most cases—add additional reagents that include a pair of “primers” that contain copies of pieces of DNA matched to the virus’ genetic code,

a DNA copying enzyme called polymerase, fluorescent reporter probes bound to small DNA strands matched to sections of the viral genome near those targeted by the primers, and free nucleotides that the enzyme uses to copy DNA.

A PCR machine raises and lowers temperature causing strands of the DNA helis to separate and ultimately replicate.

The cycle then repeats, turning two target strands into four, then eight, and so on. After about 40 cycles there are roughly 100 billion copies of the target DNA and an easily detectible fluorescent signal. “PCR has high sensitivity and selectivity,” which means it correctly spots almost all the positive cases and correctly rules out almost all the not-infected cases, says Steven Wolinsky, an infectious diseases physician at Northwestern University. “That makes PCR a really good diagnostic test.”

Detecting COVID-19 Using AI, a Cough and a Smartphone