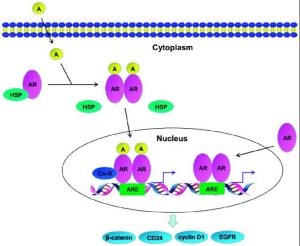 The treatment landscape for metastatic prostate cancer is shifting and expanding yet again, according to new findings from two large clinical trials presented at the 2019 annual meeting of the American Society of Clinical Oncology (ASCO). The ENZAMET trial tested the drug enzalutamide (Xtandi) and the TITAN trial tested apalutamide (Erleada) in men whose cancer is still responsive to hormone-suppressing therapies—also called castration-sensitive prostate cancer. In both trials, combining the respective drugs with the androgen deprivation therapy (ADT) substantially improved how long men lived overall and how long they lived without their cancer getting worse. Results from both trials were also simultaneously published in the New England Journal of Medicine. Enzalutamide and apalutamide are already approved by the Food and Drug Administration to treat prostate cancer that no longer responds to therapies that reduce levels of the hormone androgen, known as hormone-resistant (or castration-resistant) disease. Those approvals are expected to expand based on these new data. From a treatment perspective, the trials’ findings now mean that “there are more treatment options for patients,” said William Dahut, M.D., the clinical director in NCI’s Center for Cancer Research, who specializes in treating prostate cancer but was not involved in either study. Speaking at the ASCO meeting, Tanya Dorff, M.D., head of the genitourinary cancers program at the City of Hope Comprehensive Cancer Center in California, agreed. The trials also confirm the value of intensifying treatment in men with hormone-sensitive metastatic prostate cancer, Dr. Dorff said, “rather than being reserved for castration-resistant patients.”

In men diagnosed with metastatic hormone-sensitive prostate cancer, the cancer is typically driven to grow and spread by androgens that are produced largely in the testes. For many years, treatments that block androgen production have been a mainstay for men initially diagnosed with metastatic prostate cancer. Starting in 2014, that began to change after a large clinical trial showed that adding the chemotherapy drug docetaxel to ADT improved how long men with hormone-responsive disease lived. Shortly after, another clinical trial showed that adding abiraterone (Zytiga) to ADT also improved survival in these men, although primarily in men with many metastatic tumors, known as high-volume disease. However, docetaxel, which works by directly killing cancer cells, can have substantial side effects, and some patients aren’t healthy enough to tolerate it. And abiraterone—which blocks androgen production throughout the body—can also cause side effects, including those that affect the liver. It also has to be given in combination with the steroid prednisone, which carries its own toxicity. Enzalutamide and apalutamide block the androgen receptor on cancer cells, blunting androgens’ ability to fuel prostate cancer growth. The drugs’ efficacy in hormone-resistant metastatic prostate cancer led researchers to test them in men with less advanced disease. The goal was to see if they could “provide more complete reduction of androgen signaling” in hormone-responsive prostate cancer cells, explained Kim Chi, M.D., of the BC Cancer Agency in Vancouver, a lead investigator on the TITAN trial. Doing so, Dr. Chi said during a presentation of the TITAN data at the ASCO meeting, might help stave off the typically inevitable development of hormone-resistant cancer, which is more difficult to treat and a key driver of prostate cancer deaths.

The ENZAMET trial—funded in part by the drug’s manufacturer, Astellas Pharma, as well as government health agencies in Canada and Australia—enrolled more than 1,100 men (largely outside of the United States) with hormone-sensitive metastatic prostate cancer. The men were randomly assigned to ADT combined with enzalutamide or with any of three other androgen-blocking drugs. At a median follow-up of nearly 3 years, men who received ADT plus enzalutamide had a 33% reduced risk of death, with 80% still alive compared with 72% of men treated with ADT plus another antiandrogen drug, reported the trial’s lead investigator, Christopher Sweeney, M.B.B.S., of the Dana-Farber Cancer Institute. Men in the enzalutamide group also had better clinical progression-free survival (PFS), which the research team defined as the time until the return of disease-related symptoms, the detection of new metastases on imaging scans, or the initiation of another cancer treatment for prostate cancer, whichever came first. At 3 years, 63% of men in the enzalutamide group were alive without clinical progression of their disease, compared with 33% in the standard treatment group. Although enzalutamide appeared to be effective regardless of whether men had high- or low-volume disease, one apparent differentiating factor was planned early treatment with docetaxel. Nearly half of the men in both treatment groups received early treatment with docetaxel and, for those men, enzalutamide was not associated with longer overall survival. Side effects and serious side effects were more common in men treated with enzalutamide, including increased blood pressure and fatigue. In men who also received docetaxel, the rate of peripheral neuropathy was more than tripled in the enzalutamide group. Seven men treated with enzalutamide experienced seizures, compared with no men in the standard treatment group, and overall more than twice as many men receiving enzalutamide stopped treatment (33 versus 14). From the standpoint of efficacy, similar results were seen in the TITAN trial with apalutamide. Funded by the drug’s manufacturer, Janssen Pharmaceuticals, the trial enrolled more than 1,000 men with hormone-sensitive metastatic prostate cancer, with participants randomly assigned to receive ADT along with a placebo or ADT plus apalutamide. At 2 years of follow-up, approximately 82% of men who received ADT plus apalutamide were still alive, compared with 74% in men treated with ADT plus placebo, for a 33% reduction in the risk of death. The trial’s other primary measure was the amount time men lived without evidence on imaging scans that their disease had progressed, known as radiographic PFS. At a median follow-up of nearly 2 years, men treated with ADT plus apalutamide had a 50% improvement in radiographic PFS than men treated with ADT alone. Rash was one of the most common side effects among men treated with apalutamide, with more than a quarter experiencing this problem. For most men, the rash did not cause symptoms, but it was still the primary reason for men stopping apalutamide treatment, Dr. Chi said. The drug also appeared to be effective across different subgroups of patients, including men with low-volume and high-volume cancer. At the time of the last analysis of the data, Dr. Chi noted, approximately two-thirds of men in the apalutamide arm were still taking the drug.

More treatment options also require clinicians and patients to make more decisions. In the case of enzalutamide and apalutamide, Dr. Dahut said, both drugs “may be particularly good choices for men with low-volume disease, who might shy away from docetaxel” due to concerns about side effects. Unlike docetaxel, which must be administered intravenously in the hospital, enzalutamide, apalutamide, and abiraterone are oral drugs that can be taken at home, so they also offer greater convenience for patients. On the other hand, many patients tolerate docetaxel quite well, Dr. Dahut noted, and it’s given for a fixed duration, not continuously like the other drugs. Cost might also be a consideration when it comes to the three hormone therapy drugs, explained Michael Carducci, M.D., who specializes in treating prostate cancer at Johns Hopkins University Sidney Kimmel Cancer Center. “Our underinsured patients have struggled to cover the cost of these medications,” he said. Speaking during an ASCO session on the TITAN findings, Dr. Carducci added that other factors, such as age, can influence treatment decisions. When older patients “hear about some of the side effects [of these drugs], they don’t want to feel old or frail,” he said. So while they are willing to undergo ADT, “the idea of adding more therapy … remains a problem.” Researchers are continuing to identify potential biomarkers or specific clinical factors that can identify which patients might be the best candidates for a given treatment, Dr. Dorff noted. In the meantime, she said, clinicians “will need shared, informed decision making with our patients.” And although there is the possibility of combining these different treatments, she stressed, “combinations have not yet proven to be beneficial and should not be offered outside of a clinical trial.”