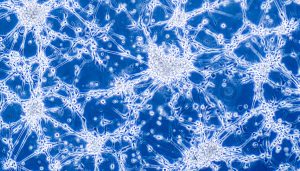 Glioblastoma, also known as glioblastoma multiforme (GBM), is a type of primary brain cancer. It arises in brain cells called astrocytes, a type of supportive (glial) cell that composes the connecting tissue of the brain. GBM is also one of the most challenging cancers to cure due to its resistance to existing drug therapies, it is also notoriously difficult to remove completely via surgery. About 25 percent of children with this type of cancer live five years or longer, while the median survival time for adults with glioblastoma is 15 to 16 months with surgery, chemotherapy, and radiation treatment.

Now an intriguing front in the battle against GBM has recently opened: a research group headed by Professor Pirjo Laakkonen at the University of Helsinki in Finland had already found that the expression of a small fatty acid-binding protein (MDGI, or FABP3) in glioblastoma cells increases their ability to invade tissues and is linked with a poorer prognosis for the patient. Further investigations of the mechanism leading to cell death revealed that silencing MDGI caused changes in the phospholipid (any of a group of fatty compounds) composition of the lysosomes in glioblastoma cells. The absence of MDGI caused instability in the membranes of lysosomes, cleaning organelles found inside tumor cells, which, in turn, resulted in the leakage of acidic and proteolytic enzymes contained in the lysosomes into the cytoplasm, initiating cell death.

“Our new research revealed that glioblastoma cells depend on the expression of a gene which produces the MDGI protein. Inhibiting the function of this gene results in the death of the tumor cells,” Laakkonen explained in a press release.

What’s more, this finding is particularly interesting because the cell death caused by leakage in the lysosomes of glioblastoma cells can be activated by using drugs that cross the blood-brain barrier. In their studies, Laakkonen’s group used an antihistamine known as clemastine. By no means new or experimental, clemastine was patented in 1960, and has been in use since 1967 to treat relieve hay fever; it was approved by the FDA as an anti-allergenic in 1977 and has been on the market since 1993 in generic forms.

In cell cultures, clemastine resulted in lysosome-mediated cell death in glioblastoma cells already at concentrations which had no significant effect on healthy cells of different types. In mouse models, clemastine was very effective in reducing the spread of brain tumors and improving the survival rate of the animals. In the case of the most invasive brain tumor model, the administration of clemastine resulted in the disappearance of the entire tumor. That the delivery method of Laakkonen’s process involves a well-known drug already approved by the FDA may well speed it through subsequent medical trials.

“Our findings demonstrate that antihistamines and other drugs that increase the permeability of the lysosomal membrane can be considered as an enhancing therapy for patients with glioblastoma alongside established treatments,” says Laakkonen.