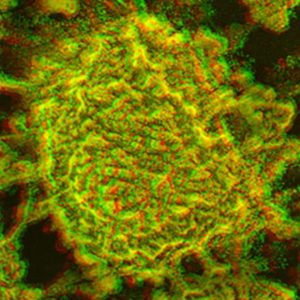 Viruses engineered to kill cancer cells are already used to treat one form of skin cancer and are being widely tested as treatments for other cancers. A new study suggests that such viruses, known as oncolytic viruses, can be further enhanced to improve the body’s immune response against tumors. This new type of oncolytic virus, the researchers found, can simultaneously kill cancer cells and provide immune cells drawn into tumors with a hormone they need to perform their own cell-killing functions. In mice with melanoma tumors, the dual-function virus was far more effective at shrinking and eliminating tumors than a standard oncolytic virus. The study’s findings were published September 17 in Immunity. “The new thing here is that this virus has been engineered to relieve immunosuppression” in addition to killing tumor cells outright, explained Phillip Daschner, program director in NCI’s Division of Cancer Biology, who was not involved with the study. “It’s an idea that may be quickly translated to use in patients.”

Shut Down by a Toxic Environment

Oncolytic viruses kill individual cancer cells, but studies also suggest that they can boost the immune system’s ability to recognize and kill a tumor. The viruses enter tumor cells specifically and replicate, eventually breaking the cells apart. When this rupture happens, tumor cell proteins that can be recognized by the immune system—called tumor antigens—get released into the bloodstream. This process can draw T cells into a tumor to start killing cancer cells, and potentially may even trigger them to recognize metastatic cancer elsewhere in the body. But getting T cells to reach and enter a tumor is only part of the challenge, explained Greg Delgoffe, Ph.D., of the University of Pittsburgh Medical Center, who led the new study. “The tumor environment by its own nature is toxic,” he said. “When T cells get in, they experience a harsh, low-oxygen, desert-like landscape.” This environment can render immune cells unable to function. Dr. Delgoffe’s lab had been testing an oncolytic virus (an engineered version of the Vaccinia virus) to better understand how interactions between cancer and immune cells change after viral infection of a tumor. They found that, when injected into tumors in mice, their virus was able to induce substantial numbers of T cells to enter tumors. The newly arrived T cells appeared to be healthy and vigorous, the researchers found. But T cells’ ability to kill can fade, transforming them from powerful destroyers to depleted bystanders with limited capacity to harm cancer cells—a phenomenon often referred to as exhaustion. The T cells that Dr. Delgoffe and his team initially found in the tumors were not exhausted, suggesting that they were newly arrived in the tumors. However, additional tests showed that these newly arrived T cells quickly developed metabolic problems after entering the tumor. People often refer to immunotherapies as “accelerators,” or agents that “take the brakes off” the immune system, Dr. Delgolffe said. “But accelerators and brakes don’t matter if there isn’t any gas in the tank.” “The virus on its own did a really good job of getting the immune cells activated,” he said. So the research team wanted to enhance the virus, he continued, so that it would secrete something into the local environment to provide the gas for the T cells.

The team quickly zeroed in on a hormone called leptin as a possible supportive molecule. Leptin is best known for helping the body regulate hunger—and therefore weight. But it’s also needed by the body’s immune cells. Not only did the tumors the researchers analyzed have low concentrations of leptin, but the T cells in those tumors had high levels of the receptor for the hormone. “This was especially true for exhausted T cells,” explained Dr. Delgolffe. Studies in cell culture showed that high levels of leptin enhance the ability of T cells to kill tumor cells. So the researchers tried delivering high doses of leptin directly into the bloodstream of mice bearing melanoma tumors. However, leptin delivered in this way had no effect on T cells within tumors. To force leptin deep into the tumor microenvironment, Dr. Delgoffe’s team re-engineered their oncolytic virus to carry the gene for leptin production. Once inside a cancer cell, the virus would also produce leptin when it copied itself. When the researchers injected their dual-function virus directly into melanoma tumors in mice, the tumors shrank substantially, and about a quarter of the mice had a complete response (that is, their tumors disappeared entirely). These mice lived substantially longer than mice injected with a control virus that didn’t carry the leptin gene. The leptin-expressing virus also improved survival in a mouse model of aggressive pancreatic cancer. In contrast, the leptin-expressing virus did not increase survival in mice bearing tumors already known to have a microenvironment supportive of T cells beyond what was seen with injection with the oncolytic virus that did not include the leptin gene.

Injection with the leptin-expressing virus also seemed to serve as a cancer vaccine in some mice with melanoma. When the team injected the same tumor cells into mice that had experienced a complete response to the leptin-engineered virus, the immune systems of most of these mice prevented tumor regrowth. In the minority of mice that did have tumor regrowth, their tumors grew at slower rates. This suggests that the engineered virus had primed the immune system to remember and recognize the tumor cells (immune memory), Dr. Delgoffe said. “It’s very exciting that there’s some evidence of immune memory against tumors,” Daschner said. “If this could work the way a vaccine works, hopefully patients would develop immunity that could prevent tumor recurrence.” Dr. Delgoffe and his team are now investigating whether altering the leptin component of the virus could result in better responses. These tweaks include engineering leptin to make it better at finding and binding to T cells and to make it last longer in the tumor microenvironment. The researchers also plan to test the addition of other supportive molecules besides leptin to their virus. Further studies will be needed before the dual-functioning virus is ready for testing in people, including understanding if the virus could work as well if injected into the bloodstream as when injected into a tumor, Daschner explained. Direct injection into a tumor would not always be possible in people, he said. Viruses aren’t the only microbe being studied as potential cancer treatments. NCI’s Bugs as Drugs initiative, for example, is supporting research into treatments based on bacteria and bacteriophages (tiny viruses that infect bacteria). “It’s a very exciting class of potential new therapies,” he said.   Source: National Cancer Institute