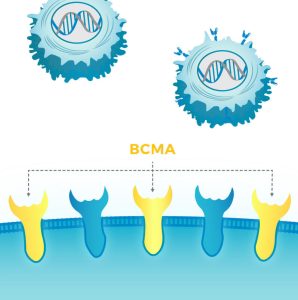 The relatively new type of cancer treatment know as CAR T-cell therapy is already being used to treat some people with leukemia and lymphoma. This form of immunotherapy has also shown promise as a treatment for multiple myeloma, although it’s not yet approved by the Food and Drug Administration (FDA) for that use.

Although such an approval may not be far off, results from a new study already suggest a potential way to improve the effectiveness of CAR T-cell therapy for multiple myeloma. The approach, spearheaded by a research team from Fred Hutchinson Cancer Research Center in Seattle, relies on a class of drugs called gamma-secretase inhibitors (GSIs), several of which have been studied to treat Alzheimer’s disease but never panned out for that use.

CAR T cells are engineered to produce a receptor that homes in on a specific protein on the surface of cancer cells. For example, the two FDA-approved CAR T-cell therapies—tisagenlecleucel (Kymriah) and axicabtagene ciloleucel (Yescarta)—both target the CD19 protein.

For multiple myeloma, the CAR T-cell therapy nearing FDA approval is engineered to target a protein called BCMA. In the new study, published September 27 in Blood, the researchers showed that treating myeloma cells with a GSI increased the amount of BCMA they produced on their surface.

And when mice bearing myeloma tumors were treated with both a GSI and BCMA-targeted CAR T cells, the cancer was much more sensitive to the treatment than in mice given CAR T cells alone, and the mice lived for long periods. By contrast, mice that only received the CAR T cells initially responded to the treatment, but their cancer eventually returned and killed them.

The findings, said the study’s lead investigator, Margot Pont, Ph.D., suggest that “if you can get more myeloma cells to express [BCMA], they can be recognized by the CAR T cells more efficiently.”

BCMA is commonly found on plasma cells, the cell of origin for multiple myeloma, and is often found at higher levels on tumor cells in patients with this cancer.

In clinical trials, many people with multiple myeloma treated with BCMA CAR T cells initially respond to the treatment, with no measurable traces of the cancer remaining in some patients. But in most people the cancer comes back, typically within 6 to 12 months.

There is some evidence that myeloma cells can avoid being attacked by CAR T cells by sloughing off BCMA, explained Jesus Berdeja, M.D., of the Sarah Cannon Research Institute in Tennessee, who has been involved in several trials of BCMA CAR T-cell therapy.

“Loss of the BCMA antigen does appear to be one of the mechanisms of resistance to CAR T-cell therapy,” Dr. Berdeja said. However, he continued, antigen loss as a cause of treatment resistance seems to be a bigger problem with CD19 CAR T-cell therapies.

Another potential hurdle for CAR T cells is that bits of the freed target antigen can remain in the circulation, acting as a decoy and drawing away CAR T cells that might otherwise attack tumor cells. It’s unclear how significant an issue this might be with BCMA CAR T-cell therapy, Dr. Berdeja noted.

The Fred Hutchinson research team had been looking for ways to potentially improve how well BCMA CAR T cells work, focusing their efforts on finding ways to increase the amount of BCMA on myeloma cells, known as antigen density, Dr. Pont said. That led them to the enzyme gamma secretase, which cells rely on to rid themselves of BCMA from their surface.

Gamma secretase is also involved in the production, by brain cells, of the amyloid proteins that are thought to drive the development and progression of Alzheimer’s. It was this role that initially led researchers to develop drugs that blocked gamma secretase activity.

One of the new study’s senior authors, Damian Green, M.D., wondered whether blocking the activity of gamma secretase could enhance the efficacy of treatments targeting BCMA on myeloma cells. “Gamma secretase is responsible for cleaving BCMA from plasma cells all of the time,” Dr. Pont said, “and we explored if blocking gamma secretase might be a good approach to increase the target on the tumor cell surface.”

In a series of experiments, the researchers showed that treating myeloma cells with a GSI, both in cell lines and those taken from the bone marrow of patients, dramatically increased the amount of BCMA the cells expressed. In turn, they found, this increased BCMA level improved CAR T cell binding to myeloma cells.

When the researchers moved to mice, the results were consistent with what would be expected from their earlier experiments. For example, GSI treatment increased BCMA expression in tumor cells in the mice. And in two different mouse models, the cancer was far more likely to regress for long periods in mice that received the GSI‒CAR T cell combination and to improve how long mice lived, compared with CAR T-cell therapy alone.

One concern, Dr. Pont noted, was whether GSI treatment might impair CAR T cells’ ability to kill cancer cells. That’s because gamma secretase also interacts with a protein called Notch, which plays an important role in the proper functioning of T cells.

Indeed, they did find evidence in laboratory studies that GSIs could impair T-cell activity. But it occurred only when the drugs were given at very high doses, much higher than what was used in the mouse experiments.

Nevertheless, Dr. Pont and her colleagues wrote that dosing of a GSI in patients being treated with BCMA CAR T cells may need to be adjusted “to avoid adverse effects on CAR T-cell function.”

Dr. Pont and her colleagues also reported on some findings from three people with advanced multiple myeloma who were eligible to participate in a small phase 1 clinical trial to test the safety of the combination approach.

The patients—part of a small “run in” group used to evaluate the impact of GSIs independently from the CAR T-cell therapy—received three doses of a GSI over 5 days. The treatment nearly tripled the percentage of myeloma cells with measurable expression of BCMA and increased expression in myeloma cells by a median of 33-fold.

The rationale and approach used in the study for increasing antigen density “is good and definitely worth pursuing,” Dr. Berdeja said.

As part of this trial, Dr. Pont noted, the research team is hoping to learn more about how myeloma cells resist CAR T-cell therapy. They also will carefully examine the effect of the GSI on T cells, she said, “particularly in the bone marrow.”