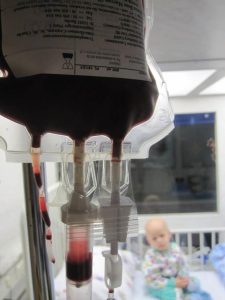 For many children with advanced forms of neuroblastoma, receiving two separate stem cell transplants as part of their treatment is more beneficial than receiving one. That’s according to the results of an NCI-supported clinical trial conducted by the Children’s Oncology Group (COG).

Children in the trial had high-risk neuroblastoma, meaning that their tumors had features that make the cancer particularly aggressive and difficult to treat. Children who received two transplants separated by several weeks lived substantially longer without their cancer progressing or developing any other cancer-related problems, an outcome known as event-free survival, than children who underwent a single transplant, reported Julie Park, M.D., of Seattle Children’s Hospital, and her colleagues August 27 in JAMA.

However, undergoing two transplants—called a tandem transplant—is more intensive, and the children who received tandem transplants had longer hospital stays, the researchers reported. However, they did not have worse side effects.

The trial’s results were initially presented more than 3 years ago at the American Society of Clinical Oncology annual meeting. Since that time, a tandem transplant—with the same initial (or induction) and pretransplant (or conditioning) chemotherapy regimen used in the trial—has become the standard treatment for most children in the United States with high-risk neuroblastoma, explained Nita Seibel, M.D., head of Pediatric Solid Tumor Therapeutics in NCI’s Cancer Therapy and Evaluation Program.

Further advances or treatment options are likely to emerge, Dr. Seibel continued. Other treatment approaches have also shown promise in children with high-risk neuroblastoma, she said, and NCI is supporting COG-led trials testing some of these approaches.

“So, while tandem transplant is the current standard, we’ll have additional information on whether alternative approaches can further improve outcomes for these children,” Dr. Seibel said.

About 800 children are diagnosed with neuroblastoma each year in the United States. It is the most common non-brain solid tumor diagnosed in children. The cancer originates in immature nerve cells, and neuroblastoma tumors often form in and near the abdomen and in the chest or neck region along the spine.

About half of kids diagnosed with neuroblastoma are considered to have high-risk disease. Different characteristics can make the cancer high risk, such as whether the cancer is widespread or has a specific genetic alteration.

Researchers are conducting studies to further improve outcomes in children with high-risk neuroblastoma and learn more about the impact of treatments on survivors, including these ongoing studies.

For many years, high-risk neuroblastoma was considered to be nearly incurable. Because it is so aggressive and can rapidly prove fatal, developing treatments that can prevent or delay relapse has been a high priority, Dr. Seibel said. And over time, that has meant that the treatments used have grown in complexity and intensity, pushing cure rates to greater than 50%.

“The treatment is definitely complicated,” Dr. Seibel said. “It’s always a careful balance between trying to avoid too much toxicity while trying to provide a cure.”

After some small clinical trials showed promise for tandem transplants in patients with high-risk neuroblastoma more than a decade ago, COG launched the large trial intended to find out for certain whether the tandem approach was better than a single transplant.

All of the trial participants received the same induction chemotherapy regimen and surgery. Children whose cancer did not progress after induction were then randomly assigned to receive either a single autologous stem cell transplant or a tandem transplant.

More than 650 children enrolled in the trial between 2007 and 2012. However, only 355 were randomly assigned to the single or double transplant. In some cases, this was because a child’s cancer progressed or a child was no longer healthy enough to receive a stem cell transplant. More often, children who initially enrolled left the study, their families deciding against being randomly assigned to one of the two treatment groups.

That’s not unexpected, said Lisa Diller, M.D., of Dana-Farber Cancer Institute, the senior investigator on the trial. “This is a big decision that families are making about a life-threatening disease,” she said. And particularly as treatments have become more intensive, “it’s a very hard decision to make.”

Among the children who were randomly assigned to a treatment group, event-free survival was 61.1% in the tandem transplant group and 48.4% in the single-transplant group at a median of 3 years of follow-up.

There was no improvement in how long patients lived overall, although the trial wasn’t designed to look for an improvement in that outcome. That’s due in part, the research team wrote, because when a relapse is detected, children quickly move on to new treatments, and trying to disentangle the effect of a new therapy on survival from the initial treatment can be problematic.

Dr. Park and her colleagues decided to look specifically at survival among trial participants who were also treated with dinutuximab. Three years after receiving the immunotherapy, children who had undergone a tandem transplant had substantially better event-free (73.3% versus 54.7%) and overall (84% versus 73.5%) survival than children who received a single transplant. Although, again, this analysis was not a planned part of the trial.

The improved survival after dinutuximab treatment in the tandem transplant group could be the result of several factors, the trial investigators noted. For instance, by reducing the extent of cancer in the body more than a single transplant, a tandem transplant might be creating an opening for immunotherapy to better control the disease, they wrote.

In other words, Dr. Diller said, “you’re asking the [immunotherapy]to do less.” But she cautioned that there “could be other explanations,” and that more research is needed to better understand what might be happening.

Overall, the trial’s findings show that “even in the era of precision medicine,” a tandem autologous stem cell transplant should be used “in most patients with high-risk neuroblastoma,” wrote Rochelle Bagatell, M.D., of the Children’s Hospital of Philadelphia, and Meredith Irwin, M.D., of the Hospital for Sick Children in Toronto, in an accompanying editorial in JAMA.

But, they cautioned, the greater efficacy of a tandem transplant has to be considered “in the context of the induction and post-consolidation therapies administered” in the trial. Other treatment approaches may prove to be more effective and/or less toxic, they wrote.

In Europe, for example, many clinicians currently treat children with high-risk neuroblastoma using only a single stem cell transplant, but with different induction and pretransplant conditioning regimens than were used in the COG trial. In a large international clinical trial, children who received the European induction regimen followed by a single transplant had substantially better event-free survival than children who got the European induction followed by the single transplant conditioning regimen used in the COG trial.

COG, in fact, has launched a phase 3 clinical trial for children newly diagnosed with high-risk neuroblastoma that includes 5 treatment groups, including one that will receive the conditioning regimen used in Europe.

The trial also includes another drug, I 131 MIBG (Azedra), that is already being tested in clinical trials in children with neuroblastoma that has come back after earlier treatment. In the current COG trial, I 131 MIBG—which delivers radiation directly to cancer cells—is being tested as part of induction therapy. The trial is also testing the use of the targeted therapy crizotinib (Xalkori) in children whose tumors express a specific genetic alteration.

A smaller, early-phase COG trial is testing the addition of dinutuximab to standard induction chemotherapy.

Even with these trials, there is an important area where progress needs to be made, Drs. Bagatell and Irwin wrote. “At present, it is not clear whether all high-risk patients benefit equally from intensification” with a tandem transplant, they stressed.

So a major point of emphasis going forward, Dr. Diller said, is using the data and analyses of tumor and other tissue specimens from completed and ongoing trials to “gain a better biological understanding of what’s going on in individual patients’ tumors and individual differences in tumor response to therapy.”

Doing so may allow researchers to identify biomarkers and subgroups of patients with high-risk disease who may or may not need more intensive therapy or would be more likely to respond to a specific treatment.

“But that will require more patients, more studies, and definitely international collaboration,” she said.