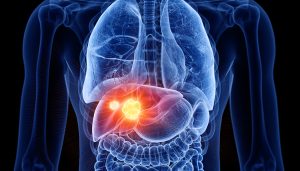 Out of the 42,030 new cases expected by year’s end, liver cancer will claim 31,780 American lives. Worldwide, the disease is predicted to strike 800,000, and kill 700,000. More than 82 percent of liver cancer patients die within five years of diagnosis, according to the National Institutes of Health. With numbers like that, it should come as no surprise that liver cancer, also called hepatic cancer, is the second cancer killer globally. As liver cancer is actually on the uptick (cases have increased by two percent since 2007), and with October being Liver Cancer Awareness Month, it is worth noting several advances in the field, as well as identifying what hurdles remain.

Perhaps unsurprisingly, a 2018 French study suggests that liver cancer caused by alcohol consumption may have a worse prognosis than other forms. While hepatitis B and C remain the main causes of liver cancer, alcohol is involved in 25 – 30 percent of diagnoses in the United States. Of the 894 study patients, 582 had a history of chronic alcohol abuse; median overall survival was 9.7 versus 5.7 months in the non-alcohol-related and alcohol-related groups respectively. Investigators surmise that survival rates fall because of alcohol-related liver damage. On a side note, scientists believe hepatitis vaccinations could prevent about half of liver cancer cases worldwide. Another study linked an enzyme related to stress reduction to liver cancer. Nqo1, produced by the body to counter free radicals, is also used by liver cancer to regulate two major cell proliferation pathways that are key to enabling the metabolic reprogramming that enables cancer cells’ super-efficient use of glucose as fuel and ultimately their rapid replication. Doctors found that by knocking out Nqo1, the metabolic adaptation needed to enable liver cancer cell proliferation was rendered inert.

Researchers at the University of Texas Southwestern found via mouse models that a protein in the body’s innate immune system that responds to gut microbes can suppress hepatocellular carcinoma (HCC), the most common type of liver cancer. HCC is associated with chronic inflammation, and investigators discovered the cytosolic pathogen sensor NLRP12 acts as a “negative regulator” of inflammation. Researchers looked at the signals sent by tumor cells in mice with and without the Nlrp12 gene. They found that the JNK (c-Jun N-terminal kinase) pathway — previously shown to be associated with liver cancer — is highly active in liver tumors that lack NLRP12; research into how NLRP12 regulates the JNK pathway is underway. Another potential treatment is starving liver cancer to death: Scientists at the University of Delaware and the University of Illinois at Chicago silenced a key cellular enzyme, hexokinase-2,  an enzyme that helps cancer cells metabolize glucose, their food source. The investigators then added metformin, a diabetes drug, and in a separate experiment the liver cancer sorafenib. Both combinations acted like one-two punches against cancer cells and could lead to new therapies in the future. Metformin and sorafenib are respectively sold under the names Glucophage and Nexavar. Finally, when surgery is not possible, as is the case when there are several tumors, ablation is an option. The process destroys tumors without removing them; doctors are careful not to tout the process as a cure (surgery usually has better results), ablation can help patients awaiting liver transplants.
References: American Cancer Society. (2019). Key Statistics About Liver Cancer. Retrieved from: https://www.cancer.org/cancer/liver-cancer/about/what-is-key-statistics.html