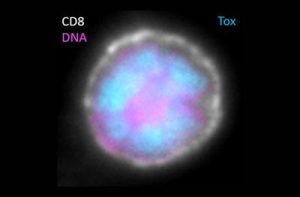 Cancer immunotherapy relies on getting T cells—the immune system’s primary killers of infected and diseased cells—to attack and kill tumor cells. But there’s an important stumbling block for immunotherapy: T cells’ ability to kill can fade, a phenomenon often referred to as exhaustion.

Research groups from around the globe have now identified several proteins that appear to play a central role in transforming T cells from powerful destroyers to depleted bystanders with limited capacity to harm cancer cells.

A series of recent studies—including three published June 17 in Nature and one initially published May 31 in PNAS—largely zeroed in on one protein in particular, a transcription factor called TOX. The researchers stressed, however, that TOX isn’t a lone wolf. It works with several other transcription factors—whose primary function is to help turn genes on and off—to orchestrate the exhaustion “program” in T cells.

Much of the research involved work done in lab studies and mouse models, so more research is needed to better understand the extent to which TOX and these other proteins influence T-cell exhaustion in people with cancer, said John Wherry, Ph.D., director of the Institute for Immunology at the University of Pennsylvania, who led one of the Nature studies.

But if additional studies confirm the role of TOX and the other transcription factors in controlling T-cell exhaustion, he added, it could open up potential strategies for boosting the effectiveness of cancer immunotherapies.

With immunotherapy, “our job is to redirect the immune response,” he said. Understanding the events that control T-cell exhaustion “allows us to get a better handle on how to do that.”

A Research Area of Need

T cells don’t come in only one flavor. There are different populations of T cells with different functions, even within the subset known as cytotoxic T cells, whose primary job is to kill problematic cells.

Effector T cells, for instance, immediately seek out and destroy specific threats, like virus-infected cells or tumor cells. Some effector T cells eventually develop, or differentiate, into memory T cells, which can permanently linger in the body to be quickly marshaled if the same threat should ever reappear.

But when the immune system is forced to be active for extended periods, such as with persistent viral infections or the progressive development of cancer, effector T cells can run out of steam.

But studies have suggested that blocking the activity of checkpoint proteins in exhausted T cells doesn’t achieve that end. And that’s important, because so-called hot tumors, those that are loaded with immune cells and thus should be ideal candidates to respond to immunotherapy, “are often just full of exhausted T cells,” Dr. Wherry explained.

So if researchers are going to succeed in making immunotherapy treatments like checkpoint inhibitors more effective in more patients, he said, exhausted T cells are “a prominent T-cell population that we need to understand better.”

To learn more about the development of T cell exhaustion, each of the four studies analyzed the differences in the genes and proteins found in cytotoxic T cells, using experiments that replicate viral infections and tumor development.

All the groups found that one of the biggest differences in expression was seen with the gene for TOX, which was consistently expressed at very high levels in exhausted T cells but at very low levels in effector and memory T cells.

In one of the Nature studies, a research team led by Andrea Schietinger, Ph.D., from Memorial Sloan Kettering Cancer Center, showed that, in lab models of a new viral infection, TOX levels remained low. But once the infection became more chronic, TOX levels spiked and remained high.

In another of the Nature studies, a team led by researchers from the Technical University of Munich in Germany and St. Jude Children’s Research Hospital in Tennessee showed that TOX appeared to be essential for the formation of exhausted T cells.

But few proteins can act alone. And in the PNAS study, a research team led by Anjana Rao, Ph.D., of the La Jolla Institute for Immunology in California, showed that there was a strong interdependence among TOX and a related protein, TOX2, as well as several other transcription factors, including a family of them called NR4A, and one called NFAT.

What Causes the Exhaustion?

So how do TOX and these other transcription factors cause exhaustion?

Evidence from several of the studies points to epigenetic mechanisms—that is, changes to the structure of chromatin, the molecular packaging for genetic material in the nucleus of cells. Those changes altered the accessibility of chromatin to transcription factors and other components of the transcription machinery. Whether certain regions of chromatin are open or closed can affect which proteins are ultimately produced in a cell and, thus, a cell’s behavior.

In the Penn-led study, for example, the researchers showed that TOX interacts with several specific enzymes involved in opening and closing chromatin.

The fact that TOX affects chromatin in this manner is important from the perspective of translating these findings into potential therapeutic approaches, said Susan McCarthy, Ph.D., of NCI’s Division of Cancer Biology.

Therapies that affect the behavior of these transcription factors is “how you think about potentially flipping [the T cell]to another state,” she said.

Several of the studies, in fact, tested what would happen if they eliminated TOX in T cells.

When Dr. Schietinger and her colleagues introduced T cells engineered to lack the gene for TOX into mice with tumors, they found that, far from becoming powerful killers of cancer cells, the T cells died off.

The findings, they wrote, support the idea that T cell exhaustion is not an immune system shortcoming, but a biological self-defense mechanism. Exhaustion happens “for a reason,” Dr. Schietinger said in a news release, “to prevent the [T] cells from getting overstimulated and dying.”

Dr. McCarthy agreed. In fact, she said the studies’ findings support the idea that T cells becoming exhausted “is not just a stage or unfortunate consequence.” Rather, exhausted T cells are “a separate lineage” of T cell that still have a role to play.

Dr. Rao’s group, meanwhile, took a different approach, engineering CAR T cells to lack both TOX and TOX2. The CAR T cells they used were otherwise similar to the two therapies already approved by the Food and Drug Administration to treat leukemia and lymphoma.

When they used the engineered CAR T cells to treat mice with established melanoma tumors, the treatment was far more effective than standard CAR T cells or those lacking only TOX or TOX2.

But taking out TOX and TOX2 may not be the only means to the same end, Dr. Rao said. In her group’s earlier study, CAR T cells that lacked NR4A were also much more effective than unaltered CAR T cells in the same mouse model of melanoma.

“That’s a strong demonstration of how [removing]a different transcription factor can do almost exactly the same thing,” she said.

From a practical standpoint, developing drugs that can manipulate the transcriptional machinery of already exhausted T cells in the body may be particularly challenging, Dr. McCarthy said. So approaches like CAR T-cell therapy, where you can genetically engineer effector T cells in the laboratory, she continued, may be the best option for translating these findings into new treatments.