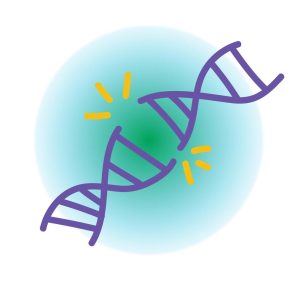 Standard initial treatment for women with newly diagnosed advanced ovarian cancer typically includes first-line therapy with a combination of surgery and chemotherapy, sometimes followed by maintenance therapy—an additional treatment intended to help prevent the cancer from coming back. But for most patients, the cancer still returns within 3 years of initial treatment.

In all three studies, the use of a PARP inhibitor as first-line therapy, maintenance therapy, or both substantially delayed the length of time before participants’ cancers came back or got worse. Results from all three trials were presented recently at the European Society for Medical Oncology (ESMO) Congress 2019 in Barcelona, Spain.

“After decades studying different chemotherapy approaches, it is the first time we have meaningfully prolonged progression-free survival and hopefully we will improve long-term outcome,” Ana Oaknin, M.D., of Vall d’ Hebron Institute of Oncology in Barcelona, an investigator on one of the trials, said in a news release.

Christina Annunziata, M.D., Ph.D., of the Women’s Malignancies Branch in NCI’s Center for Cancer Research, who was not involved in the studies, said that these results are exciting, but she noted that differences among the study designs and outcomes raises questions about how best to incorporate the different PARP inhibitors into treatment strategies for women with ovarian cancer.

The Trouble with DNA Repair

One in three women with ovarian cancer has tumors that are unable to repair a certain kind of DNA damage. Harmful mutations in the BRCA1 and BRCA2 genes, for example, lead to faulty DNA repair.

Tumors that lack this crucial DNA repair ability are called homologous recombination deficient, or HRD. HRD is defined as the presence of a harmful BRCA mutation or a certain score on a molecular test.

In 2018, a landmark clinical trial showed that maintenance therapy with the PARP inhibitor olaparib benefitted women with ovarian cancer that had a harmful BRCA mutation.

Since then, doctors questioned whether PARP inhibitors also benefit the larger group of women with HRD tumors and women with ovarian tumors that are not HRD. The three new clinical trials begin to address these questions.

In one of the new trials, an international trial called PRIMA, the PARP inhibitor niraparib was evaluated as maintenance therapy for women with newly diagnosed ovarian cancer. The trial was sponsored by GlaxoSmithKline, the manufacturer of niraparib.

More than 700 women whose tumors had responded to first-line chemotherapy were randomly assigned to receive niraparib or a placebo. Half of the women had HRD tumors.

Overall, niraparib increased the median length of time women lived without their cancer getting worse or coming back (median progression-free survival, the trial’s primary endpoint) by about 6 months compared with placebo (14 months versus 8 months).

It is important to note that the overall group included women with a high risk of recurrence—those with very advanced cancer and those whose tumors could not be fully removed by surgery—making it more representative of a real-world setting, Dr. Annunziata said.

And for women whose tumors were not HRD, niraparib improved median progression-free survival by about 3 months (8 months versus 5 months).

PARP inhibitors can affect blood cells, and the most common serious side effects of niraparib were lower than normal levels of red blood cells (anemia), platelets (thrombocytopenia), and white blood cells (neutropenia).

Findings from the PRIMA trial were published September 28 in the New England Journal of Medicine.

Niraparib was recently approved by the Food and Drug Administration (FDA) for a slightly different setting. The indication is for women with advanced ovarian cancer that is HRD and who have received at least three or more lines of chemotherapy. FDA also approved a test for HRD tumors, called myChoice CDxm, which is manufactured by Myriad Genetics.

Women with advanced ovarian cancer have two FDA-approved options for maintenance therapy after first-line treatment. Olaparib is approved for women whose tumors have a harmful BRCA mutation, whereas the other drug, bevacizumab (Avastin), is approved for all women regardless of their BRCA mutation status.

Another new trial, called PAOLA-1, tested the combination of bevacizumab plus olaparib as maintenance therapy. More than 800 women with advanced ovarian cancer whose tumors shrank either completely or partially in response to first-line therapy were randomly assigned to receive maintenance therapy with bevacizumab plus either olaparib or a placebo.

As with the PRIMA study, patients with HRD tumors appeared to have the greatest benefit. Among these women, median progression-free survival was 19 months longer in the olaparib group than the placebo group (37 months versus 18 months).

On the other hand, there was no difference in median progression-free survival between the olaparib and placebo groups among women whose tumors were not HRD.

However, study investigator Nicoletta Colombo, M.D., of the University of Milan-Bicocca, said at the conference, “I wouldn’t exclude patients with a negative HRD test” because “the benefit was confirmed in the overall population,” the trial’s primary endpoint.

Patients in both groups reported similar rates of severe side effects, the most common of which were high blood pressure and anemia. In the olaparib group, 20% of patients discontinued the treatment due to toxicity.

That the combination of bevacizumab and olaparib improves outcomes is an exciting finding, Dr. Annunziata said. “In the past, we had to choose between olaparib for BRCA mutation carriers or bevacizumab for nonmutation carriers,” she said, implying that it might be possible to combine both options.

The VELIA trial took a slightly different approach, testing veliparib as part of first-line treatment and as maintenance therapy. AbbVie, the manufacturer of veliparib, sponsored the international trial. The findings were published September 28 in the New England Journal of Medicine.

The benefit was even more striking among women with harmful BRCA mutations. For these women, median progression-free survival was 35 months in the veliparib-throughout group and 22 months in the control group.

Who Should Get PARP Inhibitors for Initial Treatment?

The three new studies show that, in addition to women with BRCA-mutated tumors, initial treatment with PARP inhibitors “also benefits the larger HRD population, which is a major step forward,” said Daniela Matei, M.D., a medical oncologist at Northwestern University in Chicago, who wasn’t involved in the studies.

Given that none of the three regimens are currently indicated by FDA for women with newly diagnosed ovarian cancer, it is difficult to predict how physicians might choose between them, Dr. Matei noted. However, doctors may be less likely to choose veliparib because it is a newer drug and they have less experience with it, she added.

So right now, it isn’t clear whether initial treatment with a PARP inhibitor should be recommended for all women, or only those with HRD tumors, she said. Although tests for BRCA mutations are part of standard care, HRD tests are not yet mainstream.

Another important question, said Dr. Matei, is what treatments will work for patients whose disease returns or who don’t respond to initial treatment with PARP inhibitors?