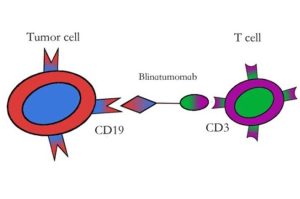 New findings from a clinical trial show that treatment with the immunotherapy drug blinatumomab is superior to standard chemotherapy for children and young adults with high- or intermediate-risk B-cell acute lymphoblastic leukemia (B-ALL) that has relapsed. Those treated with blinatumomab had longer survival, experienced fewer severe side effects, had a higher rate of undetectable residual disease, and were more likely to proceed to a stem cell transplant.

“Our study demonstrates that immunotherapy with blinatumomab is more effective and less toxic than chemotherapy as a bridge to curative bone marrow transplant for children and young adults with very aggressive relapse of B-ALL,” said Patrick Brown, M.D., who chaired the trial and is director of the Pediatric Leukemia Program at the Johns Hopkins Kimmel Cancer Center, Baltimore. “We are thrilled that these patients, whose survival has not substantially improved for decades, now have a new and better standard of care.”

The findings were presented as a late-breaking abstract at the American Society of Hematology (ASH) annual meeting on Dec. 10, 2019. The trial was led by the Children’s Oncology Group (COG), part of the National Cancer Institute (NCI)–sponsored National Clinical Trials Network. NCI is part of the National Institutes of Health. Amgen reviewed the trial protocol and amendments and provided the study drug under a Cooperative Research and Development Agreement with NCI.

“These findings will likely have immediate impact on the treatment of this group of children and young adults with relapsed B-ALL,” said Malcolm Smith, M.D., Ph.D., associate branch chief for pediatric oncology in NCI’s Cancer Therapy Evaluation Program, which sponsored the trial. “These results also reinforce the important role that federally funded clinical trials play in developing more effective treatments for children with cancer.”

When children have B-ALL that relapses after their initial treatment, they are typically given chemotherapy. The first four to six weeks of chemotherapy, the reinduction phase, is commonly followed by additional intensive chemotherapy, or consolidation treatment, to further reduce disease levels. Following this, hematopoietic stem cell transplant is considered the best treatment for approximately half of patients, based on factors such as whether relapse occurred during initial treatment or shortly after it was completed.

However, chemotherapy can produce severe side effects in some patients and is sometimes ineffective in reducing leukemia levels to the low levels needed prior to transplant. As a result, patients may not be able to proceed to transplant or transplant may be delayed, which increases the risk that the leukemia will return.

The COG study investigated blinatumomab as an alternative type of consolidation treatment to follow the reinduction phase. Blinatumomab is a type of immunotherapy that works by binding to two different molecules: CD19, a protein, or antigen, expressed on the surface of B-ALL cells, and CD3, an antigen expressed on T cells. By bringing T cells close to leukemia cells, the immunotherapy helps the T cells recognize and kill the cancer cells.

Blinatumomab has been approved by the U.S. Food and Drug Administration (FDA) for adults and children with B-ALL that has returned or has not responded to treatment. FDA has also granted accelerated approval to the drug—meaning confirmatory trials must show it has clinical benefit—for some adults and children undergoing treatment for B-ALL who achieve complete remission but still have small amounts of leukemia detectable using very sensitive methods.

Investigators in this study wanted to see if blinatumomab could increase rates of survival free from leukemia and be less toxic than intensive chemotherapy in children and young adults undergoing consolidation treatment.

The trial report was based on 208 children and young adults aged 1–30 with relapsed B-ALL who had received reinduction chemotherapy and were considered to have high- or intermediate-risk disease. They were randomly assigned to receive either two rounds of intensive chemotherapy or two 4-week rounds of treatment with blinatumomab before proceeding to a transplant. (A separate part of the study addressed children with low-risk disease.)

At a planned interim analysis, an independent data safety monitoring committee concluded that the outcome for children treated with blinatumomab was superior to that of children treated with chemotherapy only and recommended that enrollment to the high- and intermediate-risk part of the trial be stopped.

Future clinical trials will study whether blinatumomab’s effects in relapsed B-ALL can be enhanced by combining it with other immunotherapy and will test whether adding the drug to standard chemotherapy for children and young adults with newly diagnosed B-ALL is beneficial.

About the National Cancer Institute (NCI): NCI leads the National Cancer Program and NIH’s efforts to dramatically reduce the prevalence of cancer and improve the lives of cancer patients and their families, through research into prevention and cancer biology, the development of new interventions, and the training and mentoring of new researchers. For more information about cancer, please visit the NCI website at cancer.gov or call NCI’s contact center, the Cancer Information Service, at 1-800-4-CANCER (1-800-422-6237).

About the National Institutes of Health (NIH): NIH, the nation’s medical research agency, includes 27 Institutes and Centers and is a component of the U.S. Department of Health and Human Services. NIH is the primary federal agency conducting and supporting basic, clinical, and translational medical research, and is investigating the causes, treatments, and cures for both common and rare diseases. For more information about NIH and its programs, visit nih.gov.

About the Children’s Oncology Group (COG): COG, a member of the NCI-sponsored National Clinical Trials Network (NCTN), is the world’s largest organization devoted exclusively to childhood and adolescent cancer research. COG unites over 10,000 experts in childhood cancer at more than 200 leading children’s hospitals, universities, and cancer centers across North America, Australia, New Zealand, and parts of Europe in the fight against childhood cancer. Today, more than 90 percent of the 14,000 children and adolescents diagnosed with cancer each year in the United States are cared for at COG member institutions. COG’s mission is to improve the cure rate and outcome for all children with cancer. For more information, visit childrensoncologygroup.org