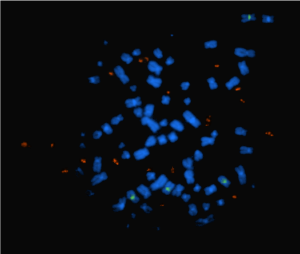 Cancer cells go to great lengths to sustain their growth, survival, and spread. Now scientists believe they have uncovered yet another way in which cancer cells may support their own uncontrolled growth. The discovery emerged from a study of brain cancer cells, which are known to sneak multiple copies of an oncogene into circular pieces of DNA that are separate from chromosomes. In the new NCI-funded study, scientists found that brain cancer cells also slip several different genetic “on switches”—pieces of DNA that help activate genes—into these DNA circles. The on switches (also called enhancers or regulatory elements) activated the copied oncogene and were critical for driving the cancer’s growth, the researchers found. The findings, published November 27 in Cell, support a different way of thinking about cancer, said Peter Scacheri, Ph.D., of Case Western Reserve University. “We think it’s not just the oncogene that is the driver [of cancer], it’s the oncogene plus regulatory elements,” he explained. Many current cancer treatments target altered proteins produced by key oncogenes. But, in light of the new findings, “we are thinking about how we can target all this extra DNA that’s important on these circles,” Dr. Scacheri said. “We are thinking about how to exploit this new knowledge for therapies.”

About 40 years ago, scientists noticed that some cancer cells repeatedly copy and paste —sometimes upwards of 50 times—the same oncogene in their DNA. This phenomenon, called oncogene amplification, is common in certain types of cancer. For example, in an aggressive type of brain cancer called glioblastoma, tumor cells typically have many copies of the EGFR oncogene. Many scientists thought that simply having several copies of an oncogene could cause a cell to become cancerous, explained Ian Fingerman, Ph.D., of the DNA and Chromosome Aberrations Branch in NCI’s Division of Cancer Biology, who wasn’t involved in the study. But that “is a very ‘gene-centric’ view,” he said. A gene is a section of DNA that contains information for making a protein. Instead of looking at genes, Dr. Scacheri and his colleagues wanted to know if other sections of DNA, like regulatory elements, were amplified along with EGFR in glioblastoma. First, the team looked for patterns in the DNA surrounding amplified EGFR in 174 samples from glioblastoma tumors. It turned out that almost every tumor contained the same two switches alongside EGFR. These switches also activate EGFR in cells that lack amplification of the gene, they found. “When genes get amplified, it looks like they are scooping up regulatory elements that are controlling their expression,” Dr. Scacheri said. It’s surprising that “specific enhancers are consistently co-amplified with the oncogene,” said Dr. Fingerman. It suggests that, over time, certain enhancers may become amplified because they provide an advantage to cancer cells, he added.

A Variety of On Switches

Further experiments identified a variety of additional on switches near amplified EGFR in several glioblastoma samples. Unlike the other two switches, these elements are typically isolated from EGFR on the chromosome and don’t normally activate the gene. In some of the glioblastoma samples, the amplified EGFR and accompanying on switches were found in DNA circles that were separate from chromosomes. Moreover, the switches appeared to be vital to glioblastoma cells. When the scientists used DNA editing techniques to interfere with each of the switches individually, EGFR gene expression and cell survival dropped. “It’s possible that, in DNA circles, contacts between genes and enhancers that normally would have been prevented in the chromosome are driving cancer cell growth via additional boosts to gene expression,” Dr. Fingerman noted. In some glioblastoma cells, there were more copies of on switches than copies of EGFR. The researchers believe that the number and variety of switches are optimized to help the cancer cells survive and grow, Dr. Scacheri explained. What’s more, amplification of normally distant switches with oncogenes may be a more general phenomenon beyond just glioblastoma. The researchers noticed a similar pattern of amplification in samples of nine different types of cancer, including medulloblastoma, neuroblastoma, and Wilms tumor. Many of the cancers that have this pattern are aggressive cancers that are difficult to treat, Dr. Scacheri pointed out.

Although researchers have known for more than 50 years that DNA circles—also called extrachromosomal DNA—are common in cancer cells, there are still many questions about how they form and what their purpose is. One idea is that they are created when a chromosome is shattered and put back together—an event known as chromothripsis. This possibility could explain how switches from distant parts of the chromosome ended up in DNA circles with EGFR, the researchers wrote. It also hasn’t been clear what genetic information is contained in DNA circles, but new technologies have allowed researchers to take a closer look, Dr. Scacheri explained. “We assumed that [DNA circles] just carried oncogenes and that everything else was junk. But it turns out that most of that extra DNA is important,” he added. For cancer cells, there may be advantages to having many copies of an oncogene and on switches in small DNA circles rather than in a large, tightly packed chromosome, Dr. Scacheri explained. For instance, another recent study showed that genes in DNA circles are more easily activated than genes located in chromosomes, potentially giving cancer cells an easier way to increase oncogene expression. DNA circles may also make cancer cells more adaptive in response to stress such as cancer treatment, Dr. Scacheri suggested. In fact, a 2013 study showed that in glioblastoma cells, the number of EGFR copies in DNA circles can go up and down to help the cells resist the effects of drugs that block EGFR. In addition, not all cancer cells in a tumor have the same number of DNA circles, Dr. Fingerman pointed out. That diversity may affect the tumor’s response to treatment, he said. Dr. Scacheri and his colleagues plan to investigate DNA circles further and hope to find a way to target the many on switches they carry. Because on switches work by activating gene transcription, treatments that target aspects of transcription, such as a class of drugs known as histone deacetylase inhibitors, could also be an avenue for exploration, Dr. Fingerman said.