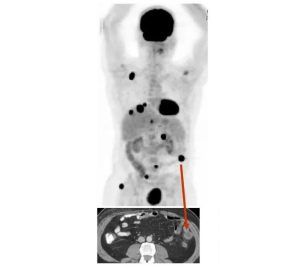 Melanoma, the deadliest form of skin cancer, can be treated effectively through surgery when it’s caught early. But once it has spread from the original site of the tumor to other organs in the body, it can become highly lethal.

This protein enhances the cells’ ability to take up an extracellular nutrient called lactate, which increases their ability to manage oxidative stress. This altered metabolism, the researchers showed, helps melanoma cells survive as they spread throughout the body to form secondary tumors in other organs.

Treating mice bearing patient-derived melanoma tumors with an experimental drug that blocks the activity of MCT1 reduced the metastatic tumor burden—that is, the number and size of metastatic tumors that formed, the study’s lead investigator, Sean Morrison, Ph.D., director of the Children’s Medical Center Research Institute at UT Southwestern, and his colleagues reported on December 18, 2019, in Nature.

The results of the study connect several previous observations, said Konstantin Salnikow, Ph.D., of NCI’s Division of Cancer Biology, who was not involved in the study. “We knew pieces of the picture, but they put it all together,” Dr. Salnikow said.

Metastasis is an inefficient process, with the vast majority of circulating cancer cells dying before they ever reach or begin to grow at a distant site.

In a previous study, Dr. Morrison’s lab found that, in the case of melanoma, at least one mechanism that accounts for that inefficiency is the high level of oxidative stress the cells experience when circulating in the blood. Oxidative stress can cause toxic effects by damaging proteins and DNA in the cell and disrupting normal cell signaling.

“We had also shown previously that there are intrinsic differences among melanomas in their capacity to metastasize,” explained Dr. Morrison. “One of the major questions has been, what’s the difference between the efficient and inefficient metastasizers?”

Several studies have shown that when cells consume lactate to produce energy, it allows them to recycle and maintain higher levels of the antioxidant glutathione. These antioxidants, in turn, increase the cells’ capacity to protect themselves from oxidative stress.

Based on these findings, the two labs collaborated to investigate whether aggressive melanomas use lactate consumption to survive the stress that cells experience during metastasis.

To conduct this study, the researchers created mouse models by transplanting melanoma cells from cancer patients into mice. The patients’ tumors were characterized as either efficient or inefficient metastasizers.

MCT1 as a Drug Target

An experimental drug from AstraZeneca, called AZD3965, blocks the activity of MCT1 and is already being clinically tested as a cancer treatment. The team decided to test the effects of the drug on the melanoma cells.

The MCT1 inhibitor did not impair the migration of melanoma cells grown in cell culture, that is, cells grown outside of an animal in a dish. However, treating the melanoma-bearing mice with the drug significantly lowered their eventual metastatic tumor burden.

The study was supported by the NCI’s Patient-Derived Models of Cancer program, which promotes the development of animal models that more closely mirror how tumor cells behave in humans. This study demonstrated exactly why these models are important, Dr. Salnikow explained.

The mouse results were “dramatically different from what they observed in cell culture because cell culture is really a very artificial system,” he said.

Although the MCT1 inhibitor reduced the number of new metastatic tumors that developed in mice, it did not affect the growth of the primary tumors. This suggests that the melanomas become particularly dependent on the MCT1 lactate transporter when spreading through the blood, the researchers wrote.

When the mice were treated with the MCT1 inhibitor, the researchers found, the tumor cells did not consume as much lactate, leading to depleted levels of antioxidants in the cells.

The research team wanted to see if supplying the tumor cells with an alternate source of antioxidants could restore their ability to spread and form additional tumors.

Indeed, when the mice were treated with antioxidants in addition to the drug, the therapeutic effects were diminished and their metastatic tumor burden increased.

The results could explain why some studies have suggested that antioxidant supplements may promote cancer progression, said Dr. Morrison. “At certain critical phases in the development and progression of cancer, the cancer cells are just on the edge of dying of stress and so the cancer cells benefit more from antioxidants than normal cells do.”

The therapeutic strategy, Dr. Salnikow explained, would be to prevent cancer cells that are on the brink of dying from taking up and using antioxidants—to, in effect, “push them off the cliff.”

When to Target MCT1?

The data suggest that melanoma cells that are sensitive to an MCT1 inhibitor would be those that are in the process of metastasizing, explained Dr. Morrison.

Therefore, the researchers predict that an MCT1 inhibitor would have the greatest therapeutic effect as a post-surgical adjuvant therapy for patients with high-risk stage III melanoma. These are patients whose cancer is beginning to spread but in whom secondary tumors haven’t yet formed.