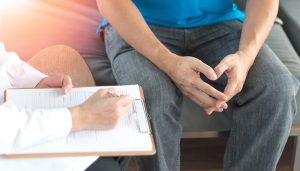 Scientists at the University of East Anglia and the Norfolk and Norwich University Hospital in the United Kingdom have developed a prostate cancer screening test that uses urine and can be completed at home. This new method, called the PUR test (Prostate Urine Risk), is designed to be used first thing in the morning and shows biomarkers associated with prostate cancer far more clearly than after a digital rectal exam.  PUR can help doctors determine treatment. As in the United States, prostate cancer is the most common cancer in the UK, but doctors nevertheless find it difficult to differentiate those tumors that will turn aggressive as opposed to those so slow-growing they are no threat to the patient’s life. “Because the prostate is constantly secreting, the collection of urine from men’s first urination of the day means that the biomarker levels from the prostate are much higher and more consistent, so this is a great improvement,” explains lead researcher Dr. Jeremy Clark. He continues: “We found that the urine samples taken at home showed the biomarkers for prostate cancer much more clearly than after a rectal examination. And feedback from the participants showed that the at home test was preferable. And it should also result in a lot more patients being tested.” Current tests for prostate cancer include biopsies, blood tests, cystoscopy (a thin tube with a camera and light on the end), a digital rectal examination, ultrasound, an MRI or CT scan – all of which require a hospital visit. An at-home option like PUR would be a huge boon for patients on active surveillance for tumor progression; only those men with a positive result would have to visit their oncologist. In the UK, the current protocol is for patients to come in every six and twelve months for a painful biopsy, leading to stress in the patient, plus an increased, and possibly unnecessary, workload for hospital staff. Researchers associated with the project added that similar tests for bladder and kidney cancers could be developed based on the PUR technology. “Because the PUR test accurately predicts aggressive prostate cancer, and predicts whether patients will require treatment up to five years earlier than standard clinical methods, it means that a negative test could enable men to only be retested every two to three years,” adds Dr. Robert Mills, who was attached to the project and is Consultant Surgeon in Urology at the Norfolk and Norwich University Hospital. In the United States, it is predicted that 174,650 cases of prostate cancer will be diagnosed in 2019, with 31,620 estimated deaths.  It is more common among men 65 or older, and African-Americans. The average age of diagnosis hovers at 66.