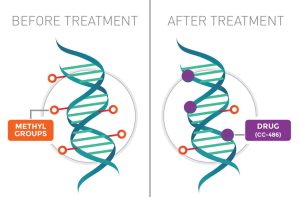 An investigational drug extended survival of adults with the blood cancer acute myeloid leukemia (AML), according to results from a large clinical trial. The drug, CC-486, is related to another therapy called azacitidine (Vidaza).

CC-486 is a pill that can be taken at home, whereas azacitidine is given as an injection under the skin or as an infusion through a vein and is administered at a hospital or doctor’s office. Azacitidine is used to treat patients with some types of blood cancer, either alone or in combination with other drugs.

In the new study, CC-486 was tested as a maintenance therapy for adults with AML that was in remission (meaning there were no signs of cancer) after receiving aggressive chemotherapy.

CC-486 is the first maintenance therapy to extend how long patients remain in remission following initial treatment and how long they live, according to the trial’s lead investigator, Andrew Wei, Ph.D., of the Alfred Hospital, in Melbourne, Australia. He presented the trial’s findings at the American Society of Hematology annual meeting in Orlando, Florida, on December 10.

“Based on the positive results of this landmark clinical trial, we hope that maintenance therapy with CC-486 might represent a potential new therapeutic standard,” Dr. Wei said during a press briefing on the study’s findings.

The increase in overall survival “is important and exciting,” said Selina Luger, M.D., a blood cancer specialist at the Hospital of the University of Pennsylvania, who was not involved in the study. “It shows a role for maintenance therapy for AML with a drug that was relatively easy to tolerate,” she added.

However, Dr. Luger cautioned that more information is needed about how best to use the drug, how to manage its side effects, and how long it should be given to patients in remission. And, she continued, “I think we need to learn which patients are most likely to benefit.”

Searching for an Effective Maintenance Therapy

Even though many people with AML go into remission after initial treatment, some cancer cells are thought to remain—cells that can eventually multiply and cause a relapse. The goal of maintenance therapy is to eliminate those remaining cells.

Although several studies have identified maintenance therapies that delay AML from returning, none has shown an improvement in overall survival—until now.

Nearly 500 people with AML who were aged 55 or older enrolled in the international trial known as QUAZAR AML-001. The trial was funded by Celgene, the manufacturer of CC-486.

All participants were enrolled within 4 months of going into remission after initial chemotherapy treatment. The majority (80%) of participants also received some form of consolidation chemotherapy. All patients were considered to be at intermediate or high risk for relapse based on certain genetic characteristics of their leukemia cells.

At the time of enrollment, all participants were unable to have a stem cell transplant. This is the standard treatment recommended for patients at high risk of relapse, but some patients may not be well enough to undergo the difficult procedure or may be unable find a donor, Dr. Luger explained.

Participants were randomly assigned to receive either CC-486 or a placebo. Treatment was given until a patient relapsed or experienced unacceptable side effects. Patients could also stop treatment if they became eligible for a stem cell transplant. Since the study was only open to patients not planning to get a transplant, that would likely only happen if a patient suddenly matched with a transplant donor, Dr. Luger said.

An Improvement in Overall Survival

Median overall survival, the study’s primary endpoint, was 10 months longer for those in the CC-486 group than in the placebo group (25 months versus 15 months).

CC-486 also extended how long patients lived without their cancer coming back (relapse-free survival) by about 5 months (10 months versus 5 months). More than 40 patients currently remain on the investigational treatment.

A “striking finding,” said Dr. Wei, was that these benefits were observed regardless of patients’ risk of relapse, the number of cycles of consolidation chemotherapy they received, or whether they were in complete remission or a form of remission called complete remission with incomplete count recovery (CRi). People with CRi have lower-than-normal levels of some blood cells and typically have poorer outcomes than those in complete remission.

But, said Dr. Luger, physicians want to know if there is a specific group of patients with AML who are more likely to benefit from this treatment. That information will likely become available as more study data are generated, she explained.

The most common side effects of CC-486 were nausea, vomiting, and diarrhea. For some patients, those effects could be limited with other medicines, Dr. Wei noted.

More patients in the CC-486 group experienced serious side effects, including a lower-than-normal number of white blood cells (neutropenia) and infections. Very few patients discontinued treatment due to side effects, the investigators noted, but most of those who did had experienced gastrointestinal effects. There were no treatment-related deaths.

In addition, changes in self-reported quality of life were similar between patients in the two groups.

Testing CC-486 In Place of Azacitidine

Although CC-486 and azacitidine are derived from the same chemical, they are not equivalent treatments, Dr. Luger stressed. Each drug may affect leukemia cells differently, she said.

There are differences in how each drug is processed by the body (what’s known as pharmacokinetics), such as how it is absorbed, distributed, and eliminated.

That may explain, in part, why a small study of azacitidine as maintenance therapy for adults with AML did not show an improvement in overall survival, Dr. Wei said. Another possible explanation, he added, is that the duration of treatment was shorter for azacitidine than for CC-486. That could be because azacitidine infusions are less convenient for patients, he explained.

Dr. Luger noted that azacitidine is used to treat adults with AML who are unable to receive the standard initial chemotherapy, and these patients often receive the treatment for an extended period of time, until they relapse.

“I think another question we can ask is, for those who achieve remission with intravenous azacitidine, will they be able to transition to the oral drug instead of staying on the intravenous drug indefinitely?” she said.

Given the results of this current trial, he continued, CC-486 might represent a “fundamental building block for new combinations that will hopefully have transformative potential for patients with this disease.”