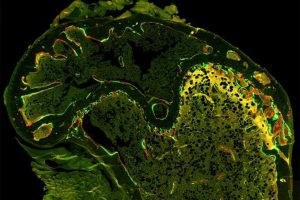 A new study in mice suggests that a biological process known as cellular senescence, which can be induced by cancer treatments, may play a role in bone loss associated with chemotherapy and radiation.

Senescence occurs when a cell permanently stops dividing but does not die. Senescent cells release a variety of substances into their environments that may affect neighboring cells.

“Senescent cells release many molecules,” said Sheila Stewart, Ph.D., of the Washington University School of Medicine in St. Louis, who led the study. “We found that some of the molecules released by senescent cells drive bone loss in mice receiving chemotherapy.”

Normally, osteoblasts and osteoclasts work in concert. “But when the balance is disrupted [by signals from senescent cells], bone can become too thin,” said Dr. Stewart. Thinning bone can lead to osteoporosis, increasing the risk of fractures and bone pain.

The researchers also showed that two investigational drugs could block molecular signals from senescent cells that disrupt bone remodeling in mice. This approach, the researchers noted, could be evaluated as a possible strategy for preventing chemotherapy-induced bone loss in patients.

“The mouse study is a good first step in an important and understudied area of cancer research—that is, the complexities of cellular senescence,” said Jeffrey Hildesheim, Ph.D., of NCI’s Division of Cancer Biology, who was not involved in the study.

Cellular senescence is a biological response to stress, such as an injury or DNA damage caused by chemotherapy. The response, which can stimulate or activate the immune system, is involved in biological processes ranging from normal development to the healing of wounds.

Senescence has long been thought of as a way that the body blocks damaged cells from proliferating and giving rise to tumors. “But the new findings add to growing evidence that senescence may actually have a broad range of biological effects—some good and some bad—especially when there is accumulation of senescent cells, as may be the case in patients undergoing chemotherapy or in those who are not healthy enough to get rid of these cells,” said Dr. Hildesheim.

“This study challenges the classical view that senescence is always a good thing while also contributing to our growing appreciation of its detrimental effects if they persist,” Dr. Hildesheim added, noting that the effects of cellular senescence may vary depending on the context in which it occurs.

Previous studies have demonstrated that senescence drives bone loss associated with aging, which has raised the possibility that senescence contributes to chemotherapy-induced bone loss, the study authors noted.

Although some treatments for breast and prostate cancer can alter the level of sex hormones and contribute to bone loss, there is evidence that treatment-related bone loss must be due to more than just the absence of hormones, Dr. Stewart noted.

For example, patients with cancer who receive chemotherapy and radiation lose much more bone than women with breast cancer who are treated with drugs called aromatase inhibitors, which eliminate estrogen, according to the researchers.

“In this study, we wanted to understand what causes bone loss beyond a lack of estrogen and whether we could do anything about it,” Dr. Stewart said. Senescent cells secrete numerous substances that researchers refer to collectively as SASP, or senescence-associated secretory phenotype.

To investigate the role that senescence and this condition might play in bone loss associated with chemotherapy, the researchers first treated mice with two commonly used chemotherapy drugs, doxorubicin and paclitaxel. Some mice also received radiation to a leg.

All three treatments induced the process of cellular senescence, and senescent cells were present in the bones of the mice, the researchers reported.

“Our results support the idea that chemotherapy-induced senescence and the biological effects of this process lead to increased activity by osteoclasts, which can lead to thinner or weaker bone,” said Dr. Stewart.

In light of this new potential mechanism of bone loss, the researchers explored possible strategies for preserving bone in mice. The investigators focused on a signaling pathway called p38MAPK-MK2, which they had previously shown regulates the expression of some of the proteins secreted by senescent cells.

This signaling pathway was active in the bone cells of mice treated with chemotherapy, Dr. Stewart and her colleagues determined. In additional studies in mice, they demonstrated that two investigational drugs that target proteins in this pathway could reverse bone loss.

“The p38MAPK-MK2 pathway is an important piece of the puzzle and can inform future studies aimed at identifying combination therapies to manage the multiple effects of chemotherapy more comprehensively, as we gain insights into the mechanisms involved and their impact not only on cancer cells but also on normal tissues,” said Dr. Hildesheim.

In general, he continued, the study results highlight the need for drug developers and clinicians to focus more broadly on the potential side effects of drugs, including chemotherapy-induced senescence and bone loss.

“These are oral medications, and they have relatively few side effects,” said Dr. Stewart. In 2018, her team reported that inhibiting the p38MAPK-MK2 pathway slowed the growth of a form of metastatic breast cancer in mice.

This finding, along with the new results, has raised the possibility of using the two drugs to kill metastatic cancer cells while also reducing chemotherapy-induced bone loss, Dr. Stewart noted.

“We are excited about these inhibitors and the potential for them to have an anticancer effect while also potentially preventing bone loss,” she said. But she cautioned that the p38MAPK-MK2 pathway is likely to be just one of many signaling pathways that contribute to chemotherapy-induced bone loss.

New drugs for treating patients with cancer who experience bone loss are needed, Dr. Stewart continued, noting that the medications currently in use, including bisphosphonates and denosumab (Prolia or Xgeva), have side effects and may not be appropriate for children, whose bones are still growing.

When Dr. Stewart and her colleagues began their investigation, they were focused on “just trying to understand what was going on with bone loss at a basic level.” But she is now optimistic that their findings could one day benefit patients. “It’s not often that basic science takes a researcher this close to the clinic,” she said.