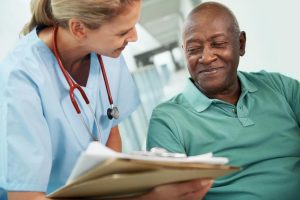 In the United States, African American men are more likely to be diagnosed with prostate cancer than white men, tend to be diagnosed at younger ages and with more advanced disease, and are more than twice as likely to die of the disease. The reasons for these disparities have not been clear.

“There is a perception among some in the medical community that prostate cancer is inherently more aggressive among African American men, and that there’s nothing we can do about” disparities in deaths from the disease, said Brent Rose, M.D., a radiation oncologist at the University of California at San Diego. But some studies have pointed to differences in access to health care as a cause of the disparities, and a new study by Dr. Rose and his colleagues supports that hypothesis.

The team found that among patients treated in the US Department of Veterans Affairs (VA) health care system—where all patients have equal access to care—African American men did not appear to have more-aggressive prostate cancer at the time of diagnosis or a higher death rate from the disease than non-Hispanic white men.

“Well-designed observational studies like this one are important for helping us to better understand the importance of access to care,” said Janet de Moor, Ph.D., M.P.H, of the Healthcare Delivery Research Program in NCI’s Division of Cancer Control and Population Sciences, who was not involved with the study.

“This study, while imperfect, definitely adds to our understanding of racial disparities in prostate cancer outcomes,” agreed David Penson, M.D., M.P.H., a urologic oncologist and health services researcher at Vanderbilt University, who also was not involved in the study.

The study, published January 27 in Cancer, suggests that providing equal access to health care could be important for eliminating or reducing disparities in prostate cancer deaths, Dr. de Moor said.

Dr. Rose’s team analyzed information on more than 60,000 men with prostate cancer from a large, nationwide database with medical and treatment information on more than 20 million veterans treated in the VA system. The men had been diagnosed with prostate cancer between 2000 and 2015. Of these men, 30.3% were African American and 69.7% were non-Hispanic white.

In the VA system, the team found, African American men did not experience delays in diagnosis or care for their prostate cancer compared with non-Hispanic white men, and they were no more likely to be diagnosed with more-advanced or more-aggressive prostate cancers. African American men also were no more likely than non-Hispanic white men to die of their disease.

This lower death rate was seen even after the researchers adjusted for factors that could potentially account for the difference, such as severity of disease at diagnosis, type of treatment received, and other illnesses.

The reason for the difference in prostate cancer deaths remains unclear, and “would be interesting to explore more fully,” Dr. de Moor said.

A “Compelling” Study, Though Questions Remain

Key strengths of this study include the large number of patients, the fact that everyone in the VA health care system has equal access to care, and the racially diverse patient population, Drs. Penson and de Moor both said. In addition, Dr. Penson said, “the comprehensive nature of the VA’s electronic medical records and the reliability of the system to capture [patient]survival outcomes strengthen the findings considerably.”

However, as the authors noted, the study also has important limitations. Because it was a retrospective observational analysis—that is, it looked back in time at patient medical records—the study cannot show conclusively that equal access to good medical care is the reason racial disparities were not seen in the VA patients. Additionally, Dr. de Moor said, “there may be some differences between people treated at the VA and [people in the general population].”

And while Dr. Penson called the study “quite compelling,” he noted that other factors, such as patients leaving the VA system to get care elsewhere and the lower mortality rate from causes other than cancer among African American veterans, could have affected the results.

Some studies have suggested that biological differences may also play a role in prostate cancer disparities, especially in the increased incidence and younger age at diagnosis in African American men.

And it’s possible, Dr. Penson said, that both biology and access to care contribute to the differences in prostate cancer outcomes that researchers have long observed. “In the end, we need to consider strategies to address disparities that account for both possibilities,” he continued.

Addressing Disparities Beyond the VA System

“The bigger issue is what can be done about it,” Dr. Penson said. Legislative solutions for increasing access to quality health care continue to be debated, he continued. “This study underscores the importance of those efforts.”

“Further research is required to look into what specifically can be done to improve care for everyone,” Dr. Rose said. “The solution is … to try to figure out what factors [in the VA system]are leading to good outcomes in African American men and how we could expand those to the broader health care community.”

To help identify those factors, Dr. Rose and his colleagues are planning further studies using additional data from the VA health system. They also intend to use the VA database to look at multiple cancer types, not just prostate cancer, to “see if preventive care, such as that provided by primary care doctors, can help reduce the rate of advanced cancers, particularly in minority communities.”