YouTube issued a statement Tuesday regarding the removal of a video press briefing with Accelerated Urgent Care doctors Dan Erickson and Artin Massihi. The video was the first of two videos playing the entire briefing from a press conference last week. YouTube pulled it for violating community guidelines. “We quickly remove flagged content that violate our Community Guidelines, including content that explicitly disputes the efficacy of local healthy authority recommended guidance on social distancing that may lead others to act 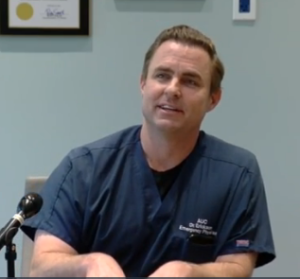 against that guidance," said the statement. Joseph Russomanno, a mass communication law professor at Arizona State University said the doctors' controversial comments played a role in the video being removed. "It would seem to me what YouTube's concern is the potential harm that this video may contain," said Russomanno. "If you look at it the content of it is contrary to what most members of the medical communty are saying about COVID-19. According to a 2017 federal court case involving conservative non-profit organization PragerU versus YouTube, the video-sharing platform contended that the First Amendment should not dictate how they moderate content on their platform. The court ruled in favor of YouTube who removed PragerU videos that were made with a conservative perspective. The video went viral, reaching over 5.46 million views, and sparked debate over recommendations to lift the shelter-in-place order. Tucker Carlson which did a follow up on April 30th and called a turning point.
"When all is said and done. This video removed may be regarded as a turning point in the way we live in this country."  It was a main stream news story. The only justification had different conclusions than those in power.  According to Carlson, "Our media is no longer challenging power they are colluding with power. Big technology companies are about power." those in charge. It was a form of dissent. Google has officially banned dissent. There can be no dissension. Fact based is no longer accepted. See his summary. Below is an edited version of the transcript of the original transcript that captures Physicians said. Abridged to 2000 words from original of 3045 Words. Link to full transcript is found and end. California Physicians Call for Immediate re-opening of Economy 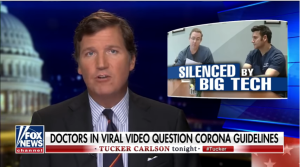