The technology, developed by Columbia University’s Center for Radiological Research, uses lamps that emit continuous, low doses of a particular wavelength of ultraviolet light, known as far-UVC, which can kill viruses and bacteria without harming human skin, eyes and other tissues, as is the problem with conventional UV light. It can be safely used in occupied public spaces, and it kills pathogens in the air before people breathe them in. 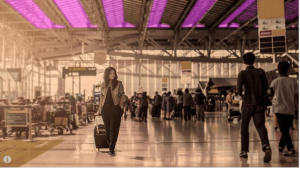 Scientists have known for decades that germicidal UV light (wavelength around 254 nm) has the capacity to kill viruses and bacteria. But conventional germicidal UV light cannot be used in the presence of people as it can causes health problems to the skin and eyes. In contrast, far-UVC light, which has a very short wavelength (in the range from about 205 to 230 nm) damage living human cells but can still penetrate and kill very small viruses and bacteria floating in the air or on surfaces. Far-UVC lamps are now in production by several companies, although ramping up to large-scale production, as well as approval by the Food and Drug Administration and Environmental Protection Agency, will take several months. At between $500 and $1000 per lamp, the lamps are relatively inexpensive, and once they are mass produced the prices would likely fall,
Source: Columbia News. Author Carla Cantor. April 21, 2020.  Full Article.
See Also:  Article and video about UVC light. With links to similar and related stories in other media outlets. Columbia University Website. Full Article.