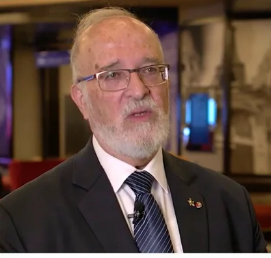 A prominent Israeli mathematician, analyst and former general claims simple statistical analysis demonstrates that the spread of COVID-19 peaks after about 40 days and declines to almost zero after 70 days — no matter where it strikes, and no matter what measures governments impose to try to thwart it.

Prof Isaac Ben-Israel, head of the Security Studies program in Tel Aviv University and the chairman of the National Council for Research and Development, told Israel’s Channel 12 (Hebrew) Monday night that research he conducted with a fellow professor, analyzing the growth and decline of new cases in countries around the world, showed repeatedly that “there’s a set pattern” and “the numbers speak for themselves.”

While he said he supports social distancing, the widespread shuttering of economies worldwide constitutes a demonstrable error in light of those statistics. In Israel’s case, he noted, about 140 people normally die every day. To have shuttered much of the economy because of a virus that is killing one or two a day is a radical error that is unnecessarily costing Israel 20% of its GDP, he charged.

Prof. Gabi Barbash, a hospital director and the former Health Ministry director general, insisted in a bitter TV exchange that Ben-Israel is mistaken, and that the death tolls would have been far higher if Israel and other countries had not taken the steps they did.

But Ben-Israel said the figures — notably from countries, such as Singapore, Taiwan, and Sweden, which did not take such radical measures to shutter their economies — proved his point. (He also released a paper to this effect, with graphs showing the trajectories.)

When Barbash cited New York as ostensible proof that Ben-Israel was mistaken, Ben-Israel noted the latest indications from New York were precisely in line with his statistics that indicate daily new cases figures peaking and starting to fall after about 40 days.

He said the policy of lockdowns and closures was a case of “mass hysteria.” Simple social distancing would be sufficient, he said.

“But you shouldn’t be closing down the entire country when most of the population is not at high risk.”

Asked to explain why the virus had caused such a high death toll in countries such as Italy, he said the Italian health service was already overwhelmed. “It collapsed in 2017 because of the flu,” he said.

Story from The Times of Israel.  Writer TOI STAFF

For full story. The Times of Israel. https://www.timesofisrael.com/top-israeli-prof-claims-simple-stats-show-virus-plays-itself-out-after-70-days/