Information on the 7 companies selected thus from the NIH Shark tank competition which is offering $250 million in funding for companies that have prospects of developing rapid tests by the Autumn of 2020.

After scrutinizing several dozen submissions the National Institutes of Health has selected its first seven projects that will move on to a new phase of manufacturing and scale-up. Nearly nearly a quarter of a billion dollars is available to these firms to scale. 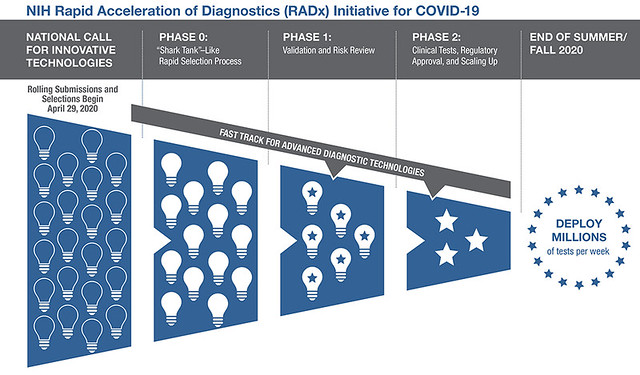 The NIH’s Rapid Acceleration of Diagnostics initiative, or RADx, was launched in late April, 2020 with the goal of providing millions of new coronavirus tests to the public by September. This includes high-throughput laboratory hardware capable of processing hundreds of samples per day as well as smaller machines designed for rapid testing in the field.

From more than 650 applications, the most promising 100 were put through a one-week assessment of their technology and feasibility. Thirty-one made the cut, and entered Phase 1 of the process: four to six weeks of deeper validation work and reviews conducted by a panel of experts.

These companies will graduate to Phase 2 and a final series of evaluations before clinical trials, fast-tracked regulatory approvals and $248.7 million in new funding.

“These technologies will help deliver faster results from labs and more and more test results within minutes at the point of care, which is especially important for settings like schools and nursing homes,” HHS Secretary Alex Azar said in a statement.

Three tests will focus on providing in-person results in under a half-hour:

Four are intended for the lab:

“The RADx initiative has enabled some of the nation’s most creative biomedical device inventors to ramp up development of their testing technologies at unprecedented speed,  innovations selected to date represent the diverse types of promising technologies that will serve the nation’s testing needs.” said NIH Director Francis Collins.

More than 20 companies are still engaged in RADx’s Phase 1, and will be considered for Phase 2 awards in the coming weeks, according to the NIH, with dozens more still moving through the funnel behind them.