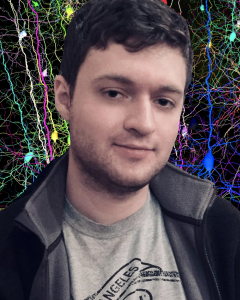 Logan Collins is a futurist, synthetic biologist, author, and innovator. When he was 16, he invented a new antimicrobial protein, OpaL (Overexpressed protein aggregator Lipophilic). Next he developed a bacterial conjugation delivery system for the gene encoding OpaL. His synthetic biology research has been published as a first-author journal article in ACS Biochemistry. In addition, his synthetic biology research has been recognized at numerous venues including TEDxMileHigh, the Intel International Science and Engineering Fair (ISEF), the International BioGENEius Challenge at the BIO International Convention, and at the American Society for Microbiology General Meeting. At Intel ISEF 2014, his synthetic biology research won 1st place in microbiology and best of category in microbiology as well as the Dudley R. Herschbach award. The latter included a trip to take part in the Nobel prize ceremonies via the Stockholm International Youth Science Seminar (SIYSS). As part of the honors at Intel ISEF, a minor planet was officially named Logancollins.

As the lead scientist at Conduit Computing, he is currently guiding the development of a computational platform which will allow them to visualize how the coronavirus’s constituent proteins interact inside of cells to build whole viruses.

Using this virtual virus assembly process as a starting point, he hope to help computationally identify drugs which might get in the way of these interactions and prevent the viruses from forming. Unlike most other initiatives which are only focusing on discovering drugs that target individual proteins of the coronavirus, Conduit is targeting both the individual viral proteins and the interactions among them, opening many new possibilities for what drugs they might find. The proposal on this research was accepted by the COVID-19 HPC Consortium. This consortium is a U.S. government initiative which has brought together supercomputer resources from academia and industry to help fight the COVID-19 pandemic. The team has been matched with Frontera, the 8th most powerful supercomputer in the world and we are using this supercomputer to implement our simulation of coronavirus assembly.

Logan has also worked in neuroengineering and connectomics. He developed a nanotechnology-based contrast agent for imaging brain tissue via x-ray microtomography. He received a $26,000 award to develop this technology (through the Beckman Scholars Program) and I acquired some promising proof-of-concept data. He presented this research at the Society for Neuroscience conference and the Beckman conference. He also wrote a sole-author editorial journal article on insect brain emulation which has been published in Biological Cybernetics: This paper proposes creating biologically realistic simulations of insect brains and details a possible path towards that goal. The international organization NeuroTechX has published his timeline of major breakthroughs in neurotechnology from 2005-2018.

In addition to research, Logan writes science fiction and sci-fi poetry. For him, writing is both intrinsically rewarding and helps to stimulate his imagination and shape his scientific endeavors. “My writing fuels my science and my science fuels my writing.”

Logan is currently a PhD candidate in biomedical engineering at Washington University in St. Louis where he is continuing research in synthetic biology, nanotechnology, and neuroengineering. In the longer term, his plan is to gain a position as a professor at a major research university. He also plans to collaborate with industries to bring his research towards its real-world applications. “My primary goal is to positively impact people’s lives with my inventions and discoveries.”